It is my great honor and pleasure to write about my 50-year academic journey in the field of Regional Science. Without my encounter with Professor Walter Isard and Regional Science in the late 1960s, my life would never have been the same. Before talking about how such an encounter happened, let me briefly explain how I grew up in Japan. I was born in 1943 in a small coastal village at the western end of the main island of Japan. Since the end of the WWII in 1945, my village had housed a small unit of the American occupation army (until 1951). I grew up there, chasing American soldiers on jeeps for chocolate candies. Given that Japan was so poor at that time, I did not even dream of going to the USA someday. Japan, however, started growing very rapidly in the mid-1950s, initiating the construction of major public infrastructures such as a super express railway system, called the Shinkansen, and a turnpike system. As a young boy, I was fascinated by such big construction projects, and naturally chose to study in the Civil Engineering Department at Kyoto University. At college, however, my interest shifted gradually from the construction work itself to the planning and social evaluation of these major infrastructure projects. Until my graduation from college in 1966, however, I had never heard of Regional Science.

My association with Regional Science started soon after becoming a research assistant of Professor Kozo Amano in the Civil Engineering Department. One day, Professor Amano, a former engineer at the Japan National Railway, told me that he had a big job for me. He said, “As you know, a super express railway, the Shinkansen, has just been completed between Tokyo and Osaka. The Ministry of Transportation wants to extend it all over Japan. However, the Ministry of Construction wants to develop instead a turnpike system all over Japan. So, you should develop an econometric model of the Japanese regional economy, and compare the economic impact of the nationwide development of the Shinkansen network with that of a turnpike network.” At that time, my knowledge of economics and econometric models was absolutely zero. So, I asked Professor Amano, how I should go about it? Then, my boss brought two books from his bookshelf, saying that, they might be of some help. The two books were ‘Location and Space Economy’ and ‘Methods of Regional Analysis’.

I first skimmed over Location and Space Economy. I felt something quite interesting with the book, but decided that it was too theoretical for my immediate job. So, I browsed the other thick book, Methods of Regional Analysis, and immediately found that this was exactly what I needed. Using various methods explained in the book, I developed an interregional econometric model of Japan. It was a huge interregional econometric model, estimating recursively the nationwide impact of developing the Shinkansen network over a 25-year period, compared to that of building a turnpike network. With the help of three professional computer programmers, I finished the computer calculations on time, and managed to report the results successfully at the joint meeting of the Ministry of Transportation and the Ministry of Construction in Tokyo (part of the work was subsequently published in the Journal of Regional Science in 1970).

As such, my first serious association with Professor Isard's work was through Methods of Regional Analysis. After finishing my first job, however, I became very hungry for theories, which made me remember the other book, Location and Space-Economy. So, this time, I read the book more carefully. Somehow, I was quite fascinated with the book. But, to tell the truth, I was able to understand very little of it. I wanted to study more seriously the foundations of spatial economics, and confessed this desire to Professor Amano. He told me: “if you are interested in learning such things, you should go to the Regional Science Department at the University of Pennsylvania”. I had never heard of this university, but it did not matter, and I asked, “how can I go there?” Then, he brought me a copy of the Journal of Regional Science from his bookshelf, and showed me its backcover, saying, “Look!, the Department of Regional Science is offering a scholarship grant. Why don't you apply for it?” Although I had little hope, I applied for the grant. One month later, to my great surprise, I got a letter from Professor Isard informing me that I got the grant. That marked the end of Phase 1 of my research career and the beginning of my 25-year association with Penn.

In the early summer of 1968, I headed for Penn brimming with renewed enthusiasm and high expectations of learning more about Location and Space-Economy from Professor Isard. Upon arriving at Penn, I found that the entire curriculum of the Regional Science Department in the graduate school was well organized beyond Methods of Regional Science and Location and Space Economy. The department, however, was rather small, with about two dozen students. It was almost like a big family with Professor Isard as the godfather. I also took many economics courses in the Department of Economics that shared the same building with the Regional Science Department. I was also fortunate to be included as a member of the location theory seminar group headed by Professors Benjamin Stevens, John Parr, Tony Smith and Colin Gannon. The seminar was an informal one with about ten regular members, taking place once a week throughout the year. Every Friday, we took a dinner together, and started the seminar at 7 o’clock, in which a member presented his recent research work. The informal seminar continued for about three hours, followed by further discussion in the bar!

My Ph.D. dissertation on multi-regional economic growth models was completed in 1972. I was quite fortunate to be supervised by Professor Tony Smith who taught me most of the advanced mathematics that I needed throughout my subsequent academic career. Furthermore, the seed of my long research-collaboration and friendship with Tony was nurtured during this period. The revised version of my dissertation was published in 1978 as Spatial Development Planning: A Dynamic Convex Programming Approach by North-Holland.

Following this Phase 2 of my research career as a Ph.D. student at Penn, Phase 3 started when I went back to the Department of Civil Engineering at Kyoto University in 1972. There, I began my research on urban economics. One of my dissatisfactions with the then prevailing urban land use theory was that no consideration was given to the high adjustment costs of land use. Thus, my main research topic in Phase 3 was the development of dynamic urban land use models with explicit consideration of such adjustment costs. Meanwhile, one day, I got a letter from Walter Isard, to my surprise, inviting me to come back to Penn to teach at the Regional Science Department. In the fall of 1976, I started teaching location theory courses at Penn, using Location and Space Economy as the main textbook. I continued my research on dynamic urban models, publishing eventually a dozen papers on this topic in various journals. In 1983, based on my research work in Phases 2 and 3, I was awarded The First Erik Kempe Prize in Memory of Tord Palander from the University of Umea, Sweden.

In the early 1980, my research career entered into Phase 4 in which I studied the general equilibrium and self-organization of urban spatial economy. This topic reflected another dissatisfaction I had with the then prevailing urban economics models based on the traditional assumption of monocentricity, inherited from the classic work of von Thünen (1826). It was rather obvious to me that most large cities were not monocentric; furthermore, a complete urban model should determine endogenously whether a city was monocentric or took on another form. I developed three types of non-monocentric urban models. First, together with several Ph.D. students at Penn, including Hideaki Ogawa and Mitsuru Ota, we developed the general spatial equilibrium models of cities under communication externalities. Second, Jacques Thisse and I started our research work on the spatial competition approach to urban modeling. Our friendship and research collaboration, still continuing today, was nurtured during this period. Third, I initiated my research work on monopolistic completion models of urban spatial organization that was further developed with a then Ph.D. student, Hesham Abdel-Rahman. In this period, I also worked with Tony Smith, Marcus Berliant and Yasushi Asami on the discrete foundations of continuous land use theory. In the late 1980s, I intended to write a two-volume book on urban economic theory. Actually, however, I completed only the first volume on the static theory of monocentric cities (Cambridge University Press, 1989). Then, before writing the second volume on dynamic and non-monocentric cities, my interest changed. 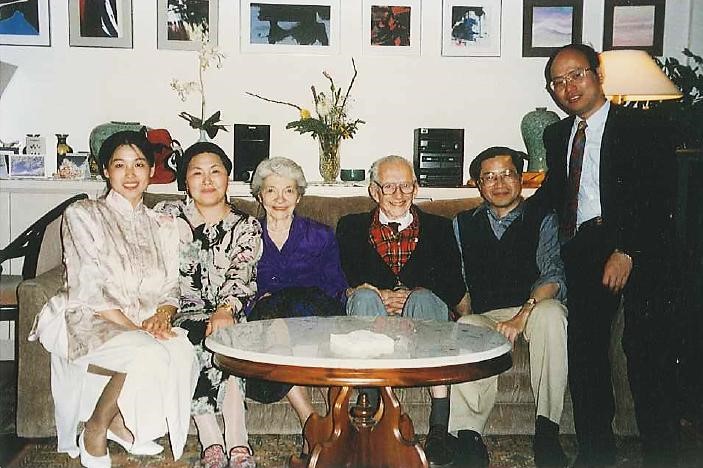 From right to left: Professor Yang at Peking U., Masa, Walter, Caroline Isard, Yuko (Masa’s wife), and Mrs. Yang at Masa’s home in 1993

Phase 5 is marked by the research collaboration with Paul Krugman and Anthony Venables on the development of the monopolistic competition theory of the spatial economy. As is well known, Paul Krugman published a pioneering paper, “Increasing Returns and Economic Geography,” in 1991 (JPE). I met Paul for the first time in November 1991 in Houston, surprisingly, at the North American Meeting of Regional Science Association. Confirming that our research interests were very close, we agreed to initiate our research collaboration. In the spring of 1992, Paul visited Penn to present his recent work, and we started our joint work. The first paper was completed in 1993 in the form of a Working Paper in the RS Department at Penn, and a part of it was published in 1995 (“When is the Economy Monocentric?: von Thünen and Chamberlin Unified”, ‘Regional Science and Urban Economics’). While continuing my joint work with Paul and several Ph.D. students at Penn (among others Tomoya Mori and Nobuaki Hamaguchi) on the same topic, I moved back again to Kyoto University in the spring of 1995. Paul also continued his joint work with Anthony Venables (then at LSE). When Paul, Anthony and I met in Tokyo at a conference in 1996, we agreed to write a book together on a unified theory of spatial economy based on our joint works. For a month in the summer of 1996, the three of us confined ourselves to a small room at the LSE, and developed the skeleton of the book. Then, after several more face-to-face meetings and frequent e-mails, The Spatial Economy: Cities, Regions and International Trade was published in 1999 by MIT Press. The World Regional Science Council awarded Paul and me in 2002 the First William Alonso Prize for our contributions to spatial economics.

In Phase 6 since the early 2000s, I worked with Jacques Thisse on the unification of urban economics and the so-called New Economic Geography, resulting in the publication of Economics of Agglomeration in 2002 from the Cambridge University Press (the second edition, 2014). Then, while teaching at Konan University in Kobe and serving as the president at the Institute of Developing Economies (and more recently at the Research Institute of Economy and Trade in Tokyo), I started working with Marcus Berliant on the development of dynamic models of knowledge creation by heterogeneous people, leading to the endogenous formation of regional cultures. On this topic, we have so far published six papers in various journals (among others, IER in 2008 and RS&UE in 2012). We are now investigating the possibility of creating a robot economist!!

Thus far, I have supervised 48 Ph.D. dissertations (37 at Penn, and 11 at Kyoto University). I am also quite grateful for The Walter Isard Award in 1998, and the Fellow Award of the RSAI in 2003. Although Professor Walter Isard passed away in 2010, my journey with regional science will continue.